skip to main | skip to sidebar

Take Six Q & A of six personal questions with celebrities in the Fashion, Beauty, and Entertainment industry who are dancing to the tune of their own beat while staying true to self.

Take 6ix Q1. Grammy Award Producer Earl Powell AKA "Trillionaire Earl" before I truly dive in what does the word "Trillionaire" represent for your brand at Eptone Productions/Roksta Music?

Take 6ix reply: Gifted answer and why I must now give you a Hi-Five and "Congratulations" on the single “Woman to Woman” you produced for Keyshia Cole. I know you're excited that “Woman to Woman” could be the next release on the album.  In addition Keyshia selecting the song as the cover title for her November 2012 album release. Take 6ix readers you have an opportunity to listen to the song in addition to place your vote for "Woman to Woman" to be the next single release from Keyshia Cole album.

Take 6ix Q2. As a music producer your energy and spirit is extremely soothing. How does that humbleness translate when creating with an artist who requires a push?

A. As a creative talent I'm very aggressive yet passionate when working with artist's. The one thing that's understood while working is: I /We want the best possible recording.

Take 6ix Q3. Keyshia Cole quoted to Essence Magazine in a past issue "Sometimes other people feel like they know what's best for you. But I know where I want to be… I work so hard to represent myself well; for me to let anyone else drive my vehicle beside God, it's like, no." (ESSENCE, October 2007). I respect her forwardness, determination, and her passion to be the leading force to her vehicle of success. Having that spirit has definitely place Mrs. Cole-Gibson in the right VIP spot. Please share some words of wisdom for an artist, musician, or producer who is struggling to get that one shot?

A. In this business, it's a marathon not a sprint. You have to allow yourself enough time to saturate your market place. Getting to know the right people and being prepared at all times. When working with artist from a producer's point of view, you should never try and change an artist when they have a direction that's working. You should embrace that and build on it. 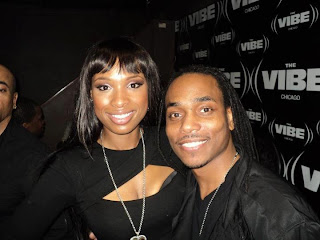 Take 6ix Q4. Earl, you have also been blessed to work with the amazingly talented actress, singer, mother, and philanthropist "Jennifer Hudson" I believe this is what set-up your Grammy Award status. Please share your part in this life changing accomplishment to your craft and how adding Grammy Award Producer can push open doors beyond your wildest dreams.

A. Working with Jennifer was a Blessing! We started working after "American Idol", and she's the best in and out the studio. The song we did is called "Stand Up" at the time we had over a Million hits on Myspace. In the music industry that's a big deal. The Grammy status is a great blessing especially in this case. History was made, first African American "FEMALE" to win a "Oscar" and a “Grammy" the first time out the gate. No one has ever done that! So I humbly embrace the historical part of that, as opposed to my own satisfaction.

Take 6ix Q5. Share six artists you've enjoyed creating magical music for and one word that exemplifies who they are?

A. Jennifer Hudson, KeyshiaCole, LaTocha Scott, (Xscape), Felony (Public Announcement), and Slique. These artists have a “Unique” Vibe that make you want to produce.

Take 6ix Q6. The music industry doesn't always shine a bright light on some artists. Would you agree that what you see isn't always what you get... As a well diverse R & B producer who's light is centered on God first, what is your recommendation for an upcoming artist to have that triple threat presence while maintaining longevity in this industry without selling your soul?


A. First off, thanks for asking that question. I believe in order to maintain who you are in this business, you Must have "JESUS" What profit a man to gain the world and lose his soul? I think you'll find that most people in this business started out in the "Church". Staying grounded and not letting the hype and the illusion of the business will keep you from selling out. Although I love nice things, that's not the reason I got into this game. I do this for the love, I just want to continuing fulfilling and embracing my God giving gift while reaching his promise of Greatness.

Take 6ix. Earl you are absolutely a humble individual with a fire that ignites magical words that touches your inner soul. To know you is a blessing and I wish you continued success as you move forward in the industry. As you say the "foundation of this industry is to stay grounded for than the blessings will be bestowed upon you." We look forward to more Grammy Award music and hopefully hearing Eptone Productions/Roksta Music work on the big screen.

If you're a music lover and like to follow an artist, producer, and all around guy of greatness who completely keeps it real humble 24-7. Follow Grammy Award Producer Earl Powell AKA “Trillionaire” on Twitter @ROKBOI
Until next time live FABULOUS...

If corresponding with Kimberly Clark on Twitter via Take Six article with "Earl Powell", please use hashtag #Take6ix
Posted by drezrehersal Lifestyle LLC. at 10:49 AM

"Elegance is not being noticed it's being Remembered." c + i. Chloe + Isabel is a dynamic and socially innovative jewelry brand designed to connect women through a modern-day social-shopping experience. A destination for fashion-loving, creative and confident women. Let the drezrehersal begin, just click the LOVE birds.

A Exquisite~Exceptional~Full Service Couture Boutique where we handle the details...the drezrehersal...the I Do's... and a GLAM array of specialty services that include Branding, Public Relations (Fashion~Beauty (Stylists On Call) and Entertainment).


Please visit us at our home site for more information on drezrehersal Lifestyle LLC.

drezrehersal Lifestyle LLC.
lalaland and Fabulously Global, Nationwide, United States
Kimberly is one of the most respected premier full-service Couture Lifestyle Producer in Southern California. She has a meticulous eye for detail, and is renowned for her gracious, professional demeanor. Kimberly’s unique style has gained recognition throughout various media, including Who’s Who In Black Los Angeles, myfoxla’s Hot List, BizBash and GLAMOUR Magazine just to name a few. drezrehersal can assist you at any stage of the planning process to design an exclusive package just for you. drezrehersal services also includes Branding and Public Relations for Beauty,Fashion & Entertainment. You may follow that division on Twitter @_Kimberly_Clark Let us plan, brand & even drez your next event.

Promote Your Page Too

GET UP CLOSE & PERSONAL WITH KIMBERLY...

BLOGS WE CONTRIBUTE TO...

At Chocolate Brides she has a weekly Wedding Wednesday column called ASK KIMBERLY! Should any Bride or Groom have a wedding, event or lifestyle question? They can email the question and we'll post the answer anonymously at ChocolateBrides.com the following Wedding Wednesday.

At Weddzilla Kimberly has offers Brides drezrehersal Tips in the past on Monday's but now on Thursday's. Expert planner discusses events, relationships, lifestyle & wedding planning. Should Brides decide to take the route of DIY (Do It Yourself) and not have their day turn into a DID (Do It Disaster). drezrehersal Tips Before & After the I Do's and so much more.

Just email your question and we'll post the answer anonymously here at: the details...the drezrehersal...the I Do's...